AnimTracer is a simple and handy tool for Unity Editor intended to automagically fix animations when the hierarchy of animated GameObject is changed. Reparent, add, delete or rename GameObjects - all changes will be traced.

Unity stores paths to animated properties instead of references or GUIDs. That’s why when you change the hierarchy of an animated GameObject you can get something like this:

AnimTracer was developed to minimize the efforts required to solve this problem.

Use ‘Tools/AnimTracer’ menu to open AnimTracer.
To start tracing you have to select an animated GameObject with an Animator component.

Now you can proceed to tracing by pressing the “Trace” button. 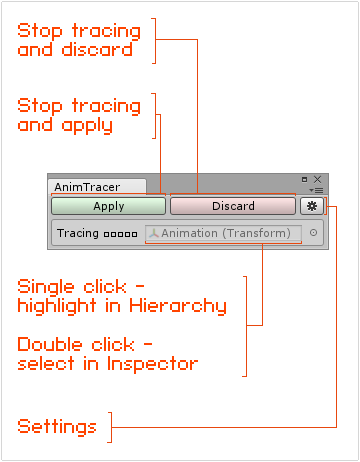 Now it’s time to change the hierarchy of the animated GameObject. When you are done press ‘Apply’ to update animations or ‘Discard’ if you change your mind. Depending on Settings (see below) ‘Discard’ may either stop tracing and keep all the changes you made (Undo is available) or revert all the changes.
Pay attention: during tracing 'Preview' in Animation Window must be turned off. AnimTracer automatically turns off 'Preview' when tracing is started, but it does not keep an eye after that.
Keep in mind: if your animations are shared between several different GameObjects and you use AnimTracer for one of them you will need to update the hierarchy of other GameObjects.

Press a button with a cog icon to open Settings window. 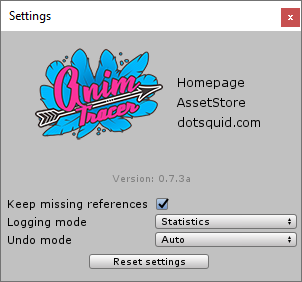 Keep missing references - if during tracing you remove some GameObjects or Components which had animated properties, animations will be left with missing references. Enable (default) - to keep these references, Disable - to remove them.

Reset settings - after confirmation resets the settings to defaults which are:

Keep in mind:
during tracing changing of some of the settings is forbidden (those fields become read only).